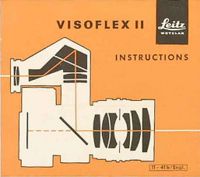 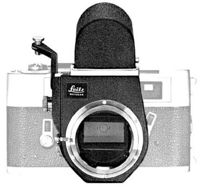 Visoflex Use with Leica M Cameras

Visoflex is a mirror housing which converts an M camera from a rangefinder into a reflex camera. Compared with modern (D)SLR it is basic and primitive, but it is functional. It seems to have taken a new lease of life on the M8. It consists of a housing containing the mirror and a slide-on pentaprism. The pentaprism can be replaced by the straight finder. This finder switches right and left.

The advantages of Visoflex III over II are a higher clearance for higher M cameras, specifically the M5, M6 TTL, M7 and M8, a more functional mount which does not need the removal of the prism and handgrip, and a quick return/flip mirror setting.

The two main uses are macro-photography and enabling longer lenses.

The more leisurely use of the Visoflex compared to modern SLR cameras is no handicap in macro. There a several ways to use it.

The most simple way is to use a normal M lens and mount it on the Visoflex, the bayonet is the same. As the Visoflex extends the lens-sensor distance, this is an instant Macro rig. Virtually any M lens may be used, but some lenses must be used at the 1 m setting instead of infinity, like the 35mm f/2 ASPH Summicron-M, to enable the rear lens element to clear the mirror. Recommended lenses are the 50mm f/2.8 Elmar-M collapsible (uncollapsed!!), the Elmarit f= 9 cm 1:2.8 and the 135mm f/4 Tele-Elmar.

The Novoflex bellows can be used on the Visoflex with adapter VISA which is still in the Novoflex catalogue and provides entrance to the whole range of use offered by that system.

Then there are the long lenses. There are a 400, 560 and 800mm f/6.3 Telyt-S of which the 400 and 560 exist in various configurations. All are achromats, i.e just two (or three for the 800mm f/6.3 Telyt-S) kitted lenses in one element, real long lenses, not tele designs. The older F = 40 cm 1:5 Telyt I and 1:5.6 / 560 Telyt are more or less obsolete due to strong field curvature, the newer F = 40 cm 1:5 Telyt II and 1:6.8 / 400 Telyt exhibit this to a lesser, but still noticeable extent. Still, these are very good lenses for the purpose intended. They were offered in either a sliding mount, where focussing is obtained by sliding the lens barrel in and out and a Novoflex pistol mount, which could be squeezed for focus.

Novoflex themselves offered the Noflexar lenses in various lengths, 200, 240, 280 300, 400 and 600. Those are mainly three-element achromats of higher specification than the Leica offerings. The lens elements were made by Leica, and mounted in a barrel/grip made by Novoflex by an Agfa subsidiary.

There were three different pistol grips: Pigriff A, B and C.

They were mounted to the Visoflex through different rings. We need only concern us with Pigriff B and C. Pigriff B mounts through ring VISBA. Pigriff C is too long for the Visoflex and will not focus to infinity. However, Novoflex still offer a conversion service (2007) at a very reasonable price, after which the lens can be used fully with, again, ring VISA.

Although the use of the Visoflex for long lenses is more primitive and elaborate than a (D)SLR, it is, with practice, perfectly doable and gives excellent results.