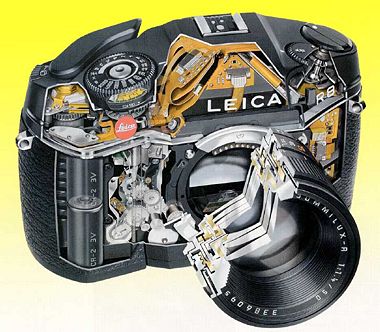 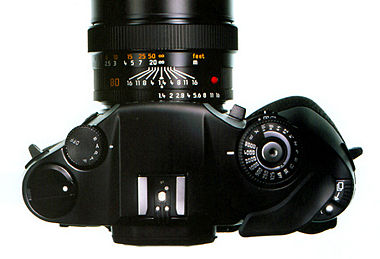 "The shutter used was a Copal vertically running metal-leaf unit[1] capable of speeds between 1/8000 and 32 seconds steplessly in automatic modes, or to 16 seconds in half-stop steps in manual mode, as well as Bulb. The flash X-sync speed is 1/250 sec.
"The shutter release is in the center of the shutter-speed dial and is threaded for a cable release. The optional Motor-Drive gives additional front and vertical-grip releases." -jcb

"It can be fitted with the Digital Modul R (DMR) digital back (discontinued in 2007 . . .) and used as a digital camera making them the only 35 mm SLRs to take a user-installable digital back. The R8 was the first R-series camera to have no association with Minolta, being solely a Leica design and showing a clear stylistic change compared to prior bodies. . . A key design goal was to evoke the Leica M and its smooth top plate instead of a raised pentaprism as in previous R series cameras, the R8 has sloped "shoulders" that blend almost seamlessly into the pentaprism housing. The shape is strongly asymmetrical, especially in plan view, with a bulged right handgrip and smaller, tapered left-hand side. . . The R8 was without doubt the most complex camera Leica had ever constructed containing extensive electronics including a microprocessor, despite its manual operation bias, and in addition was built in a very modular fashion to integrate seamlessly with motor drive units and new backs such as the Digital Modul R." -jcb